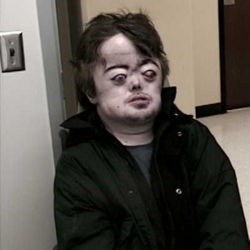 On January 31st, 2006, YTMND user grimaf made a YTMND, The Actual Truth About Brian Peppers (sad story), which outlined the 'truth' about Mr. Peppers' condition. It stated that he is wheelchair bound, currently resides in a nursing home, and that his charges of gross sexual imposition were for groping a nurse. After this site, the fad appeared to take a toll as many users felt sorry for Brian Peppers and deleted their sites.

All speculation halted when Allen Peppers released a second site, 'From Allen Peppers', explaining that he had received considerable harrassment through emails and phone messages from people wanting to know the truth behind him. It then mentioned how Brian Peppers had 'left this world for good' the morning he created the YTMND. The letter soon changed to another slide showing Brian Peppers in a photoshop of Marty McFly from the 'Back to the Future' series, and the text 'btw, he left in a time machine, lol'. It was exposed that "allenpeppers" was actualy the same user as digeridude, as exposed in I'm Allen Peppers.