Difference between revisions of "User:Lord Lonic" 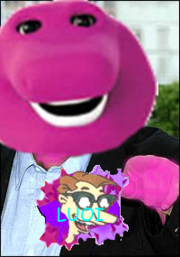 Lord Lonic (known as Lord1Lonic on ytmnd) is a real deal member of the Barney Bunch. Obviously, like all other members of the BB, he makes fun of Barney, Arthur, Drew Pickles, Homer Simpson, Ned Flanders, The Wiggles, Chaz Finster, etc, by potraying them all as homosexuals.

Recently, Lord Lonic has created (with his good friend L, AKA I-am-L on the site) an all new alternate universe called LUOI (Let's Use Our Imaginations). The first one ever created contains an edit of the infamous Sean Connery picture and cover's his head with Barney's, has well as shading the neck and hands purple and having the LUOI watermark (which features Drew Pickles's head) also on the picture[1].

Lord Lonic has recieved great criticism of his sites. One reason being the fact that most of them contain pornographic material, which encourages members to downvote his sites. Also, alot of his BB related sites contain poor edits.

Recently, he was banned after making a site "revealing" Max's "secret homosexual relationship" with Wade Fulp from Newgrounds.