The Un-Funny Truth About Scientology 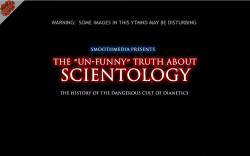 The Unfunny Truth is a YTMND that is critical of Scientology. It was created on June 13, 2006 at 11:01pm by YTMND.com user "smoothmedia", in response to the legal threats the Church of Scientology launched at YTMND.com earlier that month.