Difference between revisions of "Santabot"

SantabotAI is a new fad by user Pilleater also known as the real Drew Pickles. This fad was started years ago, on Christmas. Santabot.com is a website with a chat application (x-javascript/chat) where you can chat with a robotic Santa Clause and he will chat back. This fad employs a picture of "Santabot" from the Santabot.com website. Santabot is usually shown sitting at a computer, like the image from santabot.com. Many of the jokes for this new fad are based on the fact that Santabot is sitting at a computer and looks surprisingly, or not so surprisingly, like a pedophile RE:Brian Peppers in his santabot.com image. Sometimes this santabot.com picture is mixed with images of gay men and/or Grimace from McDonald's. Moon Man is usually present too. When Santabot, Grimace, and Moon Man are altogether, they will usually be dancing with a disco ball in the background. Moon Man does the splits. As for sound, the sound is usually homoerotic sounds liek, "Ooh, you touch my tra-la-la" or other homoerotic songs. The Gay Pimp has a song called "Sexy Nerd". Nerds and computers go together so Santabot and his santabot.com image go together for this joke. Sometimes the song is played fast so the singer sounds like he is a chipmunk with a high pitched voice. The joke here is that the user forgot to use the option in audacity to adjust "tempo", that is, to adjust speed whilst correcting for pitch. Another Gay Pimp song used is "I saw yer Cock on craigslist.com".

A spinoff fad is to have Santabot protest the recent USA legislation known as SOPA. Shortly after, max made a contest about SOPA to help spread the popularity even more.

Although YTMND is not popular anymore, the most popular and prolific remaining users tend to either make Santabot sites, Santabot style sites, or at least vote 5 on them. There are over 234. 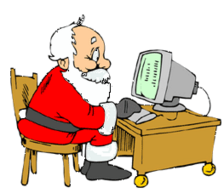