Hooker Boots YTMNDs, sometimes referred to as HOOKERBOOTSTMNDs or HBTMND is a forced fad created by YTMND user PoHandle. Typical Hooker Boots sites consist of a video clip and sound, that are edited in such a way that both an image of hooker boots, and the hooker boots theme song, are displayed at an unexpected, yet opportune moment. Unlike many previous forced fad, this particular one seems to be receiving a warm welcome from the YTMND 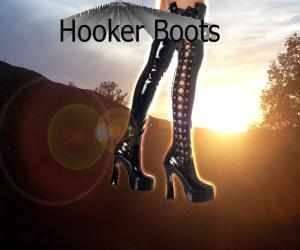 The Hooker Boots forced fad was started on 26 JAN 2009, when user PoHandle created a site warning YTMNDers of the impending fad. (http://anewforcedfadapproaches.ytmnd.com) This site featured the typical female TTS synthesized voice that says "hooker boots" as well as an early version of the Hooker Boots Theme Song. Users doctorhamgasm and gr33nscr33n immediately became fans of the new fad.

The first actual HOOKERBOOTSTMND was created on 28 JAN 2009, titled "He doesn't want us to cut through our chains..." (http://hookerboots.ytmnd.com).

After several more HOOKERBOOTSTMNDs, user gr33nscr33n was the first user other than PoHandle to make a site about this fad. His site attempted to pass as both a TOURNAMENTMND2 entry and a HOOKERBOOTSTMND. "TOURNEY2: Billy Jack" (http://billyjack.ytmnd.com) created on 5 FEB 2009 was the site that gave user PoHandle hope for his forced fad.

There is no true meaning behind the creation of the Hooker Boots fad, other than the fact that it became a popular catch phase used by PoHandle in real life when epically drunk.