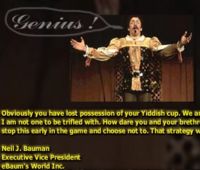 eBaum's World is a source of controversy between the eBaum and YTMND communities. In January 2006, a submission posted to eBaum's World displayed the GIF animation from the Lindsay Lohan YTMND Lindsay Lohan Doesn't Change Facial Expressions. The image was watermarked with the eBaum's Worlds image, implicitly claiming ownership over the image. No credit was given to YTMND as the image's origin.

Since the YTMND was already a well-established fad, several devotees of the YTMND Network, including: Something Awful, LUELinks, Newgrounds, and 4chan, initiated flame- and troll-raids against the eBaum's World Forums. The forum was overwhelmed by allegations of intellectual property theft, copyright infringement, and general discontent towards users of the eBaum's World Forums. In order to enlist more participants in the anti-eBaum campaign, several negative YTMNDs appeared criticizing the incident. Even more extremely, many users begain utilizing DDoS attacks against eBaum's World content servers.

On January 10th of 2006, Max Goldberg posted a cease and desist notice received from Neil Bauman, a registered co-owner of eBaum's World. The content of the letter has been put into several satirical YTMNDs due to the slightly manic content of the Cease and Desist order. Goldberg and Bauman mutually decided to come to a compromise over content use: Goldberg pledged to remove all negative YTMNDs related to eBaum's World, and Bauman replied by removing the image from the domain.

Infatuated with facts? Wikipedia has an article about eBaum's World. Go learn something.
Retrieved from "http://wiki.ytmnd.com/index.php?title=EBaum%27s_World&oldid=17367"
Categories: